How Lego changes the game by doing nothing

@StopFundingHate We have finished the agreement with The Daily Mail and are not planning any future promotional activity with the newspaper
— LEGO (@LEGO_Group) November 12, 2016


And so Twitter erupted in joy. The BBC, the Independent, the Huffington Post reported that Lego was pulling its advertising from the Mail.
It isn't.
Lego was stopping its free giveaways with the paper.
It wasn't.
A promotion had run its natural course. When a customer wrote to say he didn't think the tie-in with the Mail was appropriate, Lego responded with the tweet at the top.
The customer's letter may genuinely have caused the company to pause and think: "Hey, no. We don't want to be associated with anti-migrant, anti-judge headlines." Or it may have thought: "Here's an opportunity for some good publicity at no cost. We don't actually have to do anything.
"After all, the last freebie promotion ended last month and the next one isn't due until the spring and then we can just pick up as usual."

Well the Twitter reaction means they won't now - unless the Daily Mail demonstrably changes tack in the next six months.
And therein lies Stop Funding Hate's victory. Not in what it has achieved, but in what it is possible for it to achieve thanks to Lego's response. For not only is Lego unlikely to resume any deal with the Mail - or any other newspaper that might be perceived as peddling hate - but other companies will also think twice before entering into promotional contracts with them. 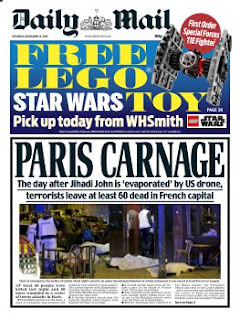 The timing of the Lego story, coinciding with the anniversary of the terrorist attacks across Paris, couldn't have been bettered. For that atrocity demonstrated the importance to the Mail of the Lego promotions - and makes Stop Funding Hate's "victory" the greater.
The paper has combined with the company and WH Smith to give away the toys twice a year for the past two or three years. They clearly boost circulation as the launch puff is always bigger the norm, dominating the page.
And so it did for the issue of November 14 last year - in spite of the fact that even before the bombers and gunmen struck in Paris, there was a pretty big news story in the killing of Mohamed Emwazi, the ISIS killer glorified by the media as "Jihadi John".
As the scale of the horror in Paris became apparent, most night editors cleared their front pages. But at the Mail, the Lego puff remained inviolate, surrendering not an inch of space to the unfolding drama.
(The Mirror really came a cropper: it's "real" front page was concealed beneath a wraparound advertising Morrison's Christmas puds.)

Lego may have inadvertently painted itself into a corner, but the good publicity will be invaluable. It may well give it a Christmas sales fillip.
Unfortunately, John Lewis found itself on the other end of this see-saw. After two days of appreciative oohs and aahs over its latest Christmas video, it looks leaden and po-faced in its response to Stop Funding Hate's suggestion that it cease advertising with the Mail, Express, Sun etc.

@StopFundingHate We fully appreciate the strength of feeling on this issue but never make an editorial judgement on a particular newspaper
— John Lewis (@JLcustserv) November 10, 2016

This is, in fairness, what most businesses have told SFH. But, coming hot on the heels of the Lego story, it looks churlish.

There are questions to be asked - and SubScribe has asked them - about the advisability of trying to get advertisers to put pressure on newspapers to change their attitudes.
Look at the furore over the Telegraph's lack of coverage - some would call it suppression - of the HSBC tax scandal last year, which was attributed to the fear of losing a valuable client.
Advertisers should not be in a position to decide what papers do or do not carry.
Stop Funding Hate accepts that, and argues that it is not asking advertisers to influence editorial judgments, simply to make a judgment of their own: Does their brand benefit from being associated with a particular type of journalism? And if it doesn't, to walk away.

This has all been theoretical until now. But Stop Funding Hate's bombardment of companies advertising in the Mail's "Enemies of the people" issue and its new video, combining some frankly offensive front pages with the cloying Christmas adverts, have brought its campaign to the attention of hundreds of thousands of people.

Not for the first time in its history, Lego may well be a game-changer. 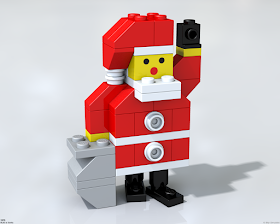