Why did the Daily Mail bury the story about the white terrorist who murdered Jo Cox?


If Jo Cox had been a pro-Brexit Tory MP and her killer Thomas Mair a jihadist Syrian, what would the Daily Mail have done with the story?
As with many questions posed by that newspaper, the answer is that we don't know - but we can speculate. And most Mail watchers would speculate that the report of Mair's conviction and sentence would be a little further forward than page 30.
The positioning of today's court report - behind several pages on the Autumn Statement, a bit of frippery about Father Christmas and a story about "laughing" Calais migrants dialling 999 from the Channel - has raised eyebrows.
As has the main thrust of the Mail's spread, based on a conversation with a neighbour, that Mair might have been motivated by a fear of losing his council house to a family of immigrants. That and his dismay that his mother had married a black man.
How's that for a Mail hat-trick: blaming two  women - his mother and his victim -  a black man - his stepfather - and possibly non-existent immigrants? (The piece says he may have been mistaken in thinking that a foreign family was lined up to be given a home in his under-occupied house.)
Where were the questions about how Mair had been radicalised, the rise of far-right factions, secret cells and the like?

Here are some possible explanations:
It was a busy news day with Philip Hammond's first budget.
Mair never said a word, so it was impossible to know what was really going through his mind.
It had all been on television, radio and social media all day, so there was nothing new to add.

OK, so those don't really cut it. Let's try the flow of the paper.

A decision will have been made during the day to let the determinedly upbeat coverage of the Autumn Statement run from the front, right through the paper, until all angles had been covered, with the leader and comment pages forming a natural bridge to "the rest of the day's news".
After all that politics, the reader would need a rest, so some light relief was needed. Hence the positioning of the Santa story. A run of news stories that could be told relatively quickly -  rather than something that would require a spread - would also be in order.
This is partly a question of varying the "pace" of the paper and partly a matter of satisfying the advertising department. With all those clear pages for the budget up front, there would be ads to pack in before editorial could be allowed another open spread.

An alternative approach might have been to put Hammond on pages 1 and 2, followed by something lightweight on 3, the Jo Cox case on a spread or two from page 4, another breaker, and then the budget as a "pull-out" through the centre of the book.
Even taking into account the Brexit significance of the budget, it's a fair bet that  the running order would have been something like that had the killing been an act of Islamic terrorism. There might even have been space for a bit on the front.

No two news days are the same, but it is possible to flesh out such speculation with evidence from another brutal street murder with another victim whose working life involved serving the public: Lee Rigby.


Fusilier Rigby was killed by a pair of black men in Woolwich in May 2013. Footage of one of the assailants holding a bloodied machete as he shouted into a cameraphone about avenging Muslims killed by British forces added to public horror at the crime. On the day after the murder, the Mail gave over its first seven pages to the story.
When Jo Cox was stabbed and shot during the referendum campaign, the Mail led on the murder (keeping its Cliff Richard puff), but then offered a bit of Seb Coe and Monty Don's begonias before returning to the story from pages 4 to 7.

It could be argued that the Rigby murder lent itself more to the blockbuster treatment: the unprecedented nature of the attack in the middle of the afternoon, the availability of pictures of the killers and the many witnesses to what was later described as their attempt to secure martyrdom through "suicide by cop" - attacking the police in the expectation that officers would be forced to fire on them.
The Mail certainly seems to have made that distinction. The Express also made more of Lee Rigby than it did Jo Cox. But - with the exception of The Times - other newspapers' coverage of the two murders was remarkably similar.
James Harding's Times gave far less space than the rest of Fleet Street to the Rigby killing, but under John Witherow's editorship, it marched in step with its rivals on Cox. The Mirror devoted one more spread to the murder of the MP than it had to the soldier.

Here's how they compared: 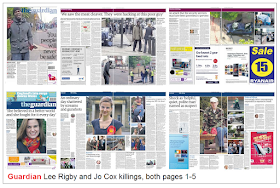 So if we accept that the papers generally regarded the killings as of roughly equal importance, did that stance follow through to the endings of the trials that led to two of the murderers being given whole life sentences and the third being ordered to serve 45 years?
All three were at some point in the proceedings described as "terrorists" and as "lone wolves". Police in both cases expressed concern about the difficulty in coping with individuals minded to kill for a "cause" and the potential numbers of such terrorists. Were those descriptions and their ramifications also treated equally once sentences had been passed?

This is how the Daily Mail covered the cases: 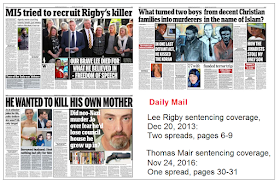 On the day the Rigby trial ended, the paper led on 80 people being hurt when a West End theatre ceiling caved in. Not quite the Autumn Statement, but a decent story. It didn't warrant the whole of the front page, however: there was still room for a puff for the following day's Christmas TV guide. The first mention of the trial came with the first of two spreads on pages 6 and 7.
Today the paper has faced flak for being alone in having no mention of Jo Cox on its front - but it could argue that that was because the budget story was so important that it demanded the entire page.

And while every other paper gave the Mair story more prominence than the Mail did, only the Times and Telegraph matched the space they had allocated to the sentencing of  Michael Adebolajo and Michael Adebowale three years earlier.
Here's how treatment of the two stories compared: 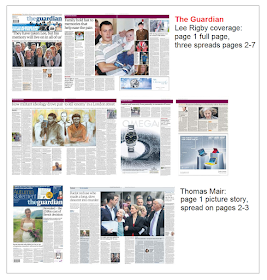 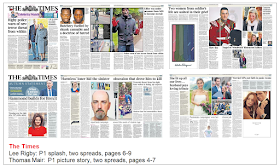 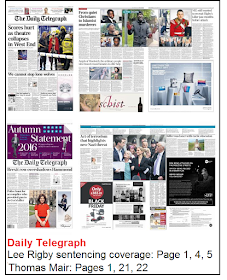 The Times and Telegraph are notable not only for the parity in the space given to the two cases, but also because they have gone beyond the "human interest" elements of today's story - Brendan Cox's statement and Mair's background -  to consider the impact of the rise of the far-right and the danger that disaffected "loners" might turn into terrorists.
Whatever your view on that, if it is legitimate to be alert to the radicalisation of individual British Muslims - "home-grown terrorists" as the Press likes to call them - then surely the same must apply to white supremacists and neo-Nazis?

The Mail's coverage today was shoddy. But it was far from alone in being found wanting.
Why did so many papers fail this test?
Because of the Brexit link?
Because of a reluctance to see where a tide of nationalism can lead?
Or simply because they can't accept that white British terrorists are as every bit as bad as brown ones from overseas?

And then there's the small matter of the serial killer who murdered at least four gay men being tucked away on pages 48 and 49 of the Mail. On balance, if a story warrants a headline like this, the chances are it should be further forward in the book than a spread on "the ads elf and safety forgot". 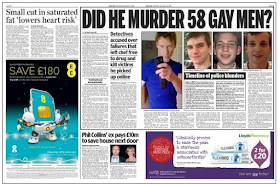