Jimmy Carter did it; Clinton did; Dubya and Blair did it - sometimes together. Sarko does it, Obama does it, even Gordon Brown does it. So of course Cameron, Osborne and co must do it. Jog, that is.
Back in the 80s it was something of a novelty to see a world leader pounding the pavement. Then it became a standard summit photo opportunity to see a whole clutch of them turn out with puffing security guards in their wake. At times it was almost as competitive as the mums' race at primary school sports day.
By now you'd have thought we'd be used to the idea that our leaders expect to be fit for office in every sense and that the early morning trot round Downing Street would be less newsworthy.
But then along came  Steve Back. He snapped David Cameron looking a little puffed out and the picture made it into print. The Prime Minister ribbed him about the unflattering image, the seed  of a "story" began to germinate and the Mail was there to harvest it.
So this week we were treated to a picture of Samantha Cameron looking tired and a little sweaty alongside another where she is fresh faced and bouncy:

She looked as glamorous as if she were heading to a glittering engagement...full make up: foundation, a rose-tinted blusher, pink lipstick and mascara. Her hair, pulled back into a ponytail, was glossy and freshly washed....in stark contrast to her appearance last week, when Mrs Cameron was spotted on her early morning run looking nothing short of bedraggled. 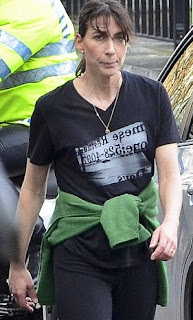 The Telegraph took the same tack, though it did have the decency to acknowledge Back as  its source, quoting the photographer:

"When I first photographed Samantha running about two weeks ago she looked a mess. Today with her make-up on and her hair swept back she looked more like she was made up for a ball than the park. I think they've deliberately smartened up..."

Well, in these lean times you have to make a crust where you can. Back may have cottoned on to an image makeover. It does seem odd to put make-up on and to wash your hair before rather than after your jog. But neither paper appears to have bothered to ask No 10 whether that was the case; there is no  'No comment' or even an 'Of course not.'
So can we trust the evidence before our eyes? The earlier photograph of Samantha was clearly taken at the end of her run - and she's obviously had a good workout; her hair is sticky and she has taken off her sweatshirt and tied it round her waist. The new photograph, on the other hand, looks as though it has been taken the moment she emerged from Downing Street to set off. Hardly a fair comparison. And if she had decided to spruce up after the Mail's bitchy report  a couple of weeks earlier, who could blame her?
Does any of this matter? Well, the Mail dressed up its coverage in a ballgown of gushing, admiring adjectives -  but this was no glittering Cinderella gown, rather an artificial Ugly Sister affair that could never disguise the malice beneath.

And the Telegraph? Well! Someone needs to teach the editors there a lesson or two in juxtaposition. They should have learnt  from the hilarious picture of the Queen and two duchesses over a ginormous witchcraft heading. Clearly not. The SamCam makeover was on the same page as the report of the Leveson inquiry.
Now I may be off beam here, but I thought Leveson was looking into media standards -  with a particular accent on invasions of privacy.

Thank you for sticking with it to the end. Please do share your thoughts below. And please take a look at the other posts. They are all media related.

Sold down the river the Beeb's flotilla and fireworks fiasco - and a feeble fightback. Why didn't the top man have his hand on the tiller?

Out of print a love letter to newspapers in this digital age. Why they don't have to die if we have the will to let them live and thrive

Missing: an opportunity How the hunt for Madeleine McCann could be turned into a force for good instead of just a festival of mawkish sentimentality

Riding for a fall Does buying a ticket for a jolly day out at the races mean you are fair game for the snobs who sneer and snipe?

Just a pretty face Illustrating the business pages isn't the easiest job in the world, but spare us the celebs who aren't even mentioned in the story

The world's gone mad Don Draper returns and  the drooling thirtysomethings go into overdrive But does anybody watch the show? (But there is more Whipple in this post!)